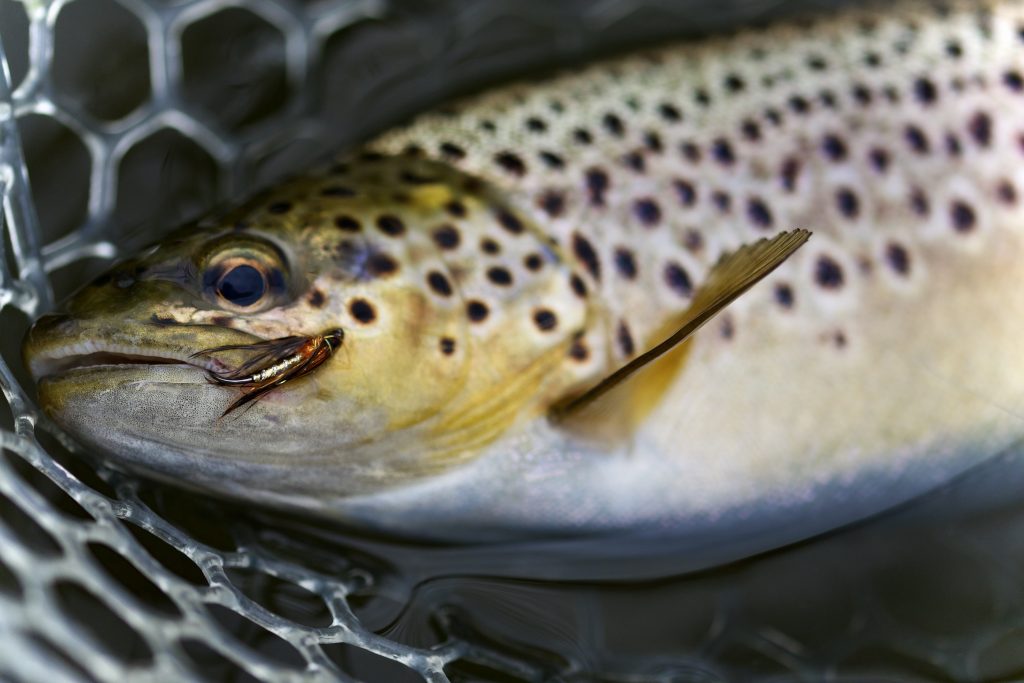 While looking through some fishing photos of Wimbleball from last season I came across a shot of a lovely buttery wild Brown trout not far off  2lb, in the scissors of its jaw a spider style pattern of gold tinsel & a cinnamon/orange dub thorax.  The photo was taken at the Upton arm in early June, it crossed my mind that this might be the earliest we will get back onto the water fishing.  It wet my appetite to look into the Coch y Bonddu fly, its connections with ancient Egypt & how I learnt a lot from that days fishing…

How the day unfolded…

I remember it well, a bright sunny day, I was out in the boat on my own, so I chose to head for my favourite spot, the Upton arm,  & a chance of a wild brownie, water levels were reasonably high but there was still room to flick your fly under those lovely overhanging branches so that it dropped onto the water as if it was an insect falling from the leaves.

I thought the weather was perfect for the dry fly, Interestingly although I could see fish moving & sipping they weren’t interested in my dry offerings, whatever the pattern & unfortunately I couldn’t determine what they were fixated with. I mulled over my options & opted for a team of small wets & nymphs, very sparse in dressing, a buzzer on the point a Diawl Bach as the middle dropper & the spider as the top dropper.  The flies hit the water, I gave them a few seconds to sink into the surface film,  just as I was about to give them a twitch, I felt a take & lifted into this lovely wild Brown. 3 more brownies of similar size came to the net over the next hour or so, all to the same spider pattern.

Then suddenly it all became clear to me, out of the blue literally. A little tap on my tackle bag as it fell from the sky & caught my attention, it was unmistakably a beetle, what anglers across the world identify as a Coch y Bonddu.

Now I began to realise why this particular fly was working, it matched perfectly the colour of the wing casing, but interestingly like no other Coch y Bonddu fly I had ever tried! Although there was no obvious sign of the beetles when I started fishing, in fact the main beetle event I thought had been done & dusted a couple of weeks before according to the latest catch returns & anglers comments, clearly however they were still about & the wily resident trout remembered them…

Yet to catch a rainbow on this day, I decided to head back to Cow Moor where I felt the wind might be just right to blow any lurking beetles onto the water from the Bankside shrubs & trees. I carried on with my same set up but nothing was happening, I tried the dries again, nothing, once again & frustratingly I could see trout rising & sipping, what was I doing wrong?

I searched my fly box & came across some foam beetles I remember tying for the hawthorn hatch earlier in the season, although black foam, they had a peacock herl underbody, which clearly matched the other dominant colour of the Coch y Bonddu beetle.

I cast this out as a single fly, it floated, but not as a dry, it sank into the surface film and sat just under the water, I had a couple of tentative tweaks but still no real attention. 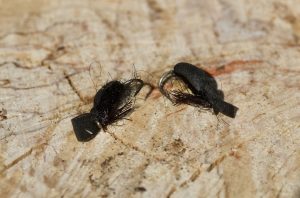 I then remembered that under the trees in the Upton arm they liked it a bit deeper. I kept the same foam beetle on but this time I used a buzzer tip style line, a Snowbee countdown sink tip at 2ips, this did the trick, the fly was still no more than an inch or so under the surface, but it seemed to give the Rainbows the bit of confidence they needed & I immediately was into a decent fish that took me to the backing with some searing & exhilarating runs, several more came to the net.

I had cracked the technique, well for this day anyway, as Im sure you’ll all agree, every day is different on the water, that’s why we enjoy fishing so much!

Having reflected on this days fishing & with the opportunity to get a close look at the Coch y Bonddu beetle, I’ve tied a new pattern with a brown foam back & Veniard Peacock dub underbody, just hope I get the chance to give them a swim…

What can we learn from this?

Well one thing I’ve learnt over the years, reading the water & trying to match the hatch wherever possible is a must, also you can’t always rely on the rainbows to chase everything that flashes passed their eyes, as predatory & aggressive as they are, once acclimatised to the water, where plenty of natural food is available they quickly revert to their natural instincts, become less aggressive, more weary & are happy to sip small offerings rather than chase big prey, until of course the big prey is the hatch on the day as with fry bashing towards the end of the season. I’m sure you’ve all probably seen this in action, a nice warm summers day and the area is full of trout sipping & gently rising to midges, you imagine a lure stripped through will reap rewards, but to your dismay its completely ignored & you have to keep down sizing until you find the size & colour they are happy with.

Often you will see anglers not even considering their fly choice, the weather conditions or what might be hatching, as in my previous blog, if you don’t want to blank don’t decide how or where you’re going to fish before you arrive & get to the waters edge.

How much do you know about the Coch y Bonddu?

The actual beetle the fly imitates is actually the garden Chafer Beetle (Phyllopertha horticola), it typically lives in wooded pastures, parkland, meadows & grasslands. The adult beetles are around from mid May & can stay in numbers well into July, so don’t rule them out after the main hatch as I did.

With a beautifully Iridescent metallic like green head & under body, hidden under  a dark chestnut coloured wing casing they really are quite a smart looking beetle & plenty of colours there for the keen fly tyer to match.

Coch y Bonddu translated from welsh refers to red & black, not only does this relate roughly to the beetle colouring  but also the colour of the hackle used on the original fly, the furnace hackle, with a black stem & red body, some argue that if the hackle also has black tips then it is the Coch y Bonddu feather.

But possibly the most interesting but pointless thing about them is that they are related under the family of the Scarab beetle, a symbol of immortality & resurrection to the ancient Egyptians, an amulet or lucky charm they were placed on the heart of the mummified body to protect them & their memories on the journey to the afterlife. I however can only envisage them devouring anything in their path as they rampage through the corridors within the pyramid, but maybe I’ve watched too many Mummy movies…

Tight lines &  I just hope you will think of this, the next time you tie a Coch y Bonddu fly onto your tippet…