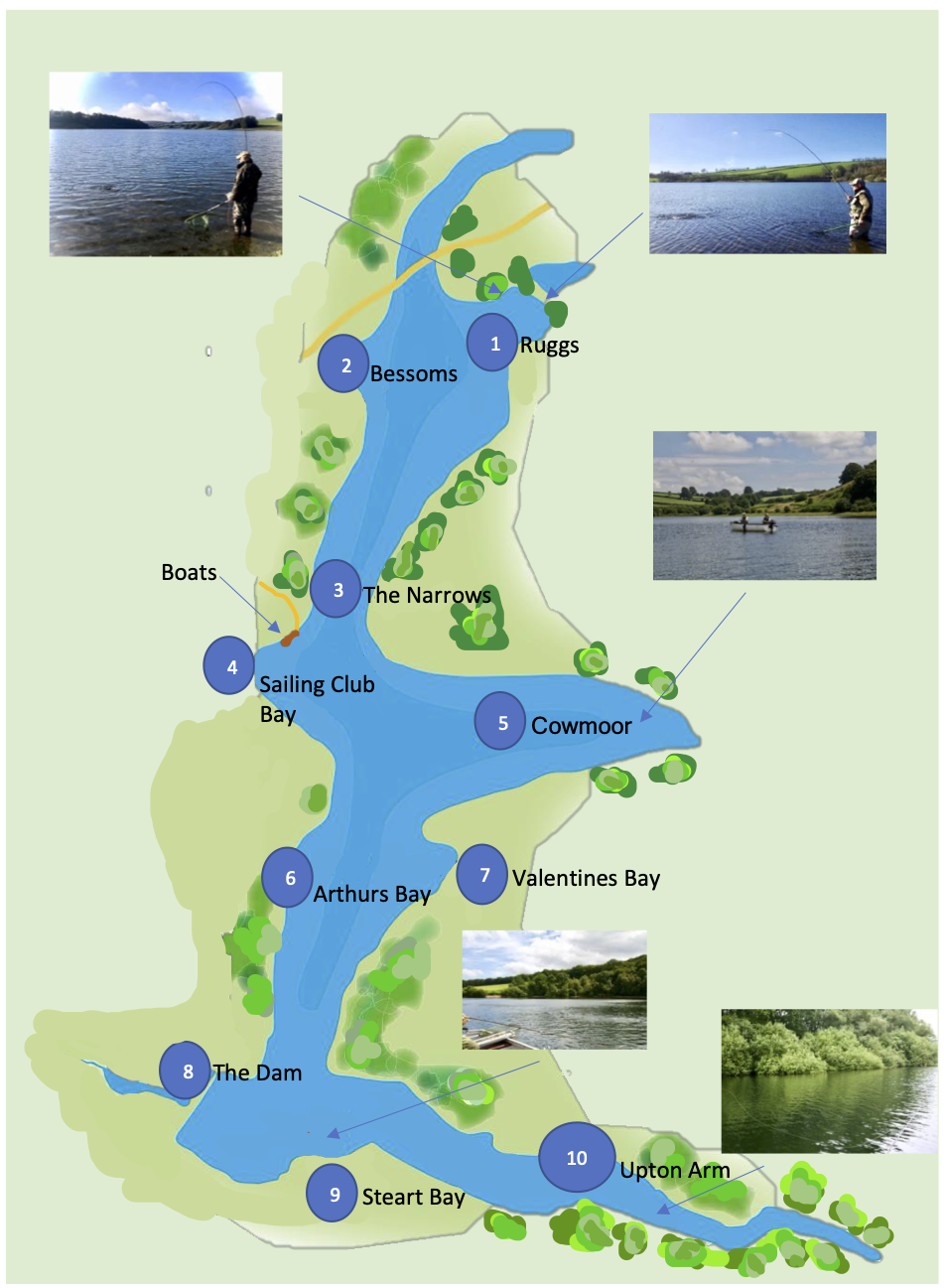 One of the best known spots on the lake, often seen as the go to area while you are trying to establish what the fish are doing. A good holding area for fish with very gently sloping banks allowing for anglers to wade well into the lake. The shallow weed covered bottom is a haven for aquatic life & good imitations work well throughout the season. Towards the end of the year, big browns can be found here as they initially come in search of fry, then lurk around to access the feeder streams with mating in mind.

Sheltered from the cooler north and easterly winds, also ensures some decent fishing from boat & bank when other more vulnerable spots are tough going. When water levels are reasonable, be sure to take your boat close into the feeder stream & tree lined bank to the North casting into the shore for some good sport on the feeding trout cruising the shallow margins.

Bessoms Bay another favourite with anglers & shares a similar depth to Ruggs but as the grassy banks near the bridge the drop off from the shore steepens & offers some great close in deep water where fish often hold & is ideal with faster sink lines both in hotter and cooler temperatures when fish aren’t on the surface.

Away from the bridge where the grass field slopes less & you near the trees top water tactics can produce some great catches & is a good location to try terrestrial flies as well as nymphs. Daddy Long legs, Hawthorn, hoppers as well as Diawl Bachs & buzzers all work well here. A great spot when the wind is from the South West.

An unassuming area of water often bypassed by anglers as they motor up & down the lake. The Narrows can offer some excellent drifts, especially if the wind is blowing up & down the lake. Keep close into the tree lined banks on the easterly side & tempt the trout with terrestrial bugs & flies as if they’d fallen from the branches. The western bank is often overlooked but if the wind allows a drift along passed the old slipway its certainly worth a try.

A relatively shallow bay with depths around the 15ft mark, the moorings & boats can create shelter for the fish, but care is also needed when drifting, you also don’t want a hard fighting prize fish to wrap itself around a mooring. With the bottom averaging 15ft & covered in soft mud & weed it can be a great area for large hatches of flies especially midges throughout the year. Always worth a shout if the wind has been blowing from the North east as fish may have come into the bay following food.

A great starting point for many anglers as they leave the dock & see a comfortable sized bay in front of them offering the prospect of many drift & depth options.  It has a lovely weedy shallow area & inlet stream to its eastern extreme which can be really productive in the early summer & Autumn. A gently shelving North shore offers a great drift if the wind is right.  Its Southern bank offers a steep drop off ideal if the fish are a little deeper as in high Summer or during the early Spring.

A tree lined small bay on the west side of the lake as you head towards the dam area, the shore may be like a shingle beach when the water levels are low. Its always worth taking a look here especially good to shelter from strong winds from the west & a good chance of a decent wild Brown.

Often by passed by boat anglers heading to explore the dam or the Upton arm, but don’t be too hasty to pass it by, the reasonably well formed bay offers sheltered conditions & slack water especially when the wind is from anything East of North or South, the fish often show right in the margins, surface feeding, so a delicately presented fly cast into the shoreline can be very rewarding, with the chance of picking up a decent wild brown as well.

The steep sloping shores into deep water lends itself to intermediate 7 sinking lines although occasionally this area can produce big fish off the surface, especially when the Coch-y-bonddu beetle are being blown onto the water from the area of the Upton arm. Otherwise small Damsels & Hare’s Ears work well, not neglecting the B&P spider. Fish the area with a slow retrieve and get ready to hold on if you are lucky enough to temp an overwintered leviathan. The shore has a beach area which is of shale & the steep drop off means you can work your flies through several depths in a relatively small area

The deepest part of the lake yet certainly an area to consider in extremes of heat & cold, the depths here allow for a relatively constant temperature at varying depths. Use a fast sinking line count it down & when you find the right depth you will be in for some fun sport… Snakes, boobies & Zonkers can be deadly here…

A wonderfully tranquil area of the lake, this is where the river Haddeo flows into the reservoir, Its steep tree-lined sides offer beautiful scenery & some great surface fishing, dry flies, like hoppers, beetles & other terrestrial flies cast underneath or alongside the overhanging trees are almost certainly going to attract a rise from a brown trout. This area of the lake is renowned for its head of wild brown trout.